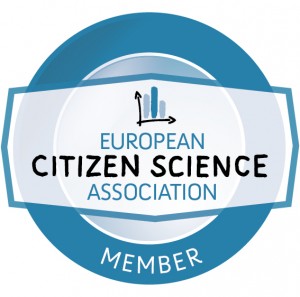 Italy is one of the countries with the highest biological diversity in Europe, thanks to the diversity of environments it hosts. Unfortunately, this biodiversity is at risk and citizens’ awareness is crucial to active contribute to its protection.

An active and voluntary engagement of citizens will play an increasingly decisive role in stimulating innovative approaches in research and decision making but also in terms of data collection and monitoring.

In the last few years there has been a proliferation of citizen science initiatives, due to an increase in public concern about human impacts on ecosystems and to governments’ cutbacks in funding and staffing for their monitoring. Recent technological advances have facilitated the gathering of reliable data, hence encouraging the participation of citizens. Several positive effects have been attributed to the involvement of citizens: environmental stewardship, increase of scientific knowledge and social capital, citizen inclusion in policy making and improvement of environmental policies.

However, the main challenge of citizen science activities is the collection of environmental data of high scientific quality. Policy makers do require an information system based on the latest information and communication technology (ICT), which can provide real-time biodiversity data that allow strategic decisions.

CSMON-LIFE aims at contributing to a new strategic approach, enlarging and improving the knowledge base for biodiversity policy in Italy, one of the EU Countries with the highest biodiversity. This goal will be achieved involving citizens in data collection and validation, thus accelerating the progress towards the objectives of the European 2020 biodiversity strategy and contributing to the formation of new potential “green” professionalities.

The project will make use of ICT, such as smartphones and tablets, to collect primary geo-referenced and validated biodiversity data, which will be integrated into the databases of the Italian National Biodiversity Network. The activities and results of CSMON-LIFE will be actively disseminated to local, national and EU administrations, scientific organizations and stakeholder groups.

Specific project objectives are to:

• Contribute to the development of policies and effective technologies to achieve the objectives of the European strategy for biodiversity until 2020, to preserve and protect natural resources by means of a sustainable management.

• Engage citizens, especially young people, in the processes of discovery, control and protection of biodiversity, making them aware of the development of local policies and involving them in a critical evaluation of both legislation and environmental policy;

• Give importance to citizen science as a tool for the formation of an environmental conscience, and for monitoring and evaluating of the state of the environment;

• Develop knowledge of the critical factors for biodiversity conservation, knowledge which is useful to policy makers and governments to develop measures to prevent further climate changes and to cope with current changes, and to the development of environmental legislation;

• Disseminate knowledge to local governments and stakeholders (national parks, communities, producers, fishermen), national administrations, international agencies and networks in the field of biodiversity loss and impact of climate changes, and to facilitate the implementation of EU environmental policy;

• Improve the knowledge of the importance and value of biodiversity, especially among the new generations, and actively involve the citizens in the activities of the project through a special recruitment campaign, which will be realized thorough both conventional and non-conventional forms of communication.

This will be achieved through:

• The launch of several campaigns of citizen science, which will be developed around a series of environmental issues concerning in particular: the loss of biodiversity caused by the presence of alien species, the effects of climate change, the conservation of rare species and the human impact on the quality of the environment in which we live;

• Training of at least 30 citizen scientist with the skill level necessary to perform data validation;

• Dissemination of the aims of the project both in the whole study area and at the national level through different media, from television to the press, and through the internet and the common social media, in order to reach at least 200,000 citizens;

• Creation of one (1) distributional map for each of the target species in the survey area;

• Preparation and dissemination of a white paper on best practices in citizen science, in terms of organization, data collection, and quality issues, to be published both in Italian and English;

• Organization of at least 3 conferences (1 per year) in the project area for the dissemination of its topics and results;

• Organization of at least two international events (at the beginning and at the end of the project), with the involvement of the EU infrastructure Lifewatch and the newborn European Association for Citizen Science (EACS);

• Organisation of an information campaign on the value and importance of biodiversity;

• Organization of several (at least 2 per year) events of unconventional communication (eg, guerrilla gardening, BioBlitz, etc..), with the participation of citizens;

• Creation of a sustainable network of citizen scientist;

• Contribution to the project Sistema Ambiente 2010 of the Italian Ministry of the Environment, by connecting the databases of CSMON-LIFE to the federated database system of the Italian National Biodiversity Network;

• Contribution to European and global networks of biodiversity (LifeWatch and GEOBON).